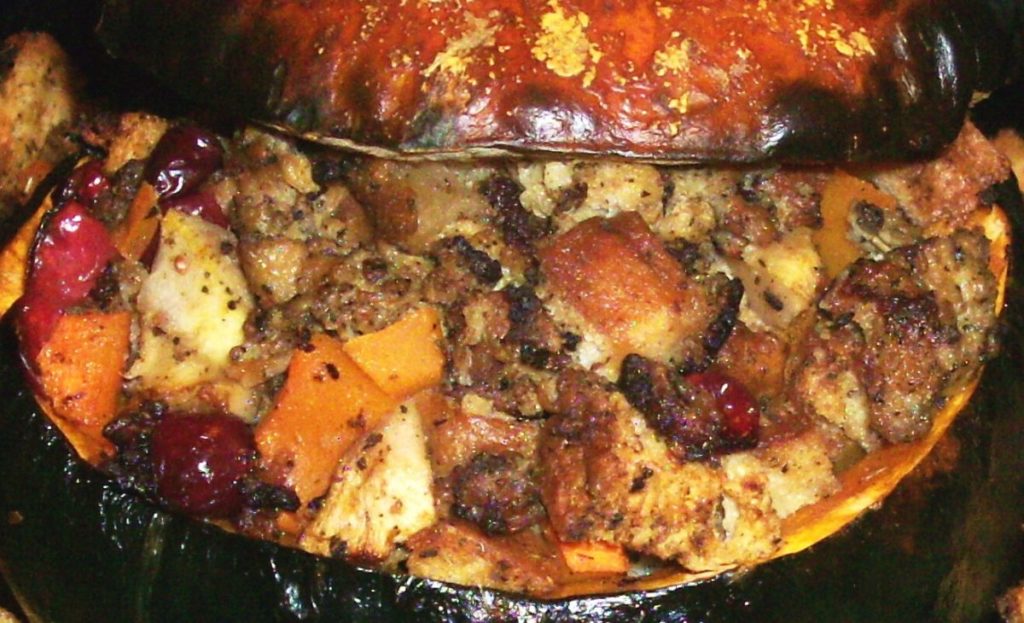 Turkey may be the star of the Thanksgiving dinner table, but the side dishes are by far our favorites, and the Dressing vs Stuffing  controversy is trotted out every year for everyone to voice an opinion. Everyone has their particular recipe that just HAS to be on the table, and last year I went to a meal on Thanksgiving that included no less than 4 pans of separate dressings! I got a question this week on the proper cooking temperature of stuffing as well, so let’s explore some basics about this popular dish.

What’s the difference? It couldn’t be simpler, really.
Stuffing is cooked inside of a cavity, and dressing is baked in a pan separately. (“Dressing” in this use meaning a starch-based, flavored mixture meant to be served as a side dish on a dinner plate, and not a creamy salad topping or a decorative garnish.)

Stuffing can be stuffed into a cavity in a whole bird, or into a pocket formed in a large roast, or spread on a flat piece of meat or fish and rolled up. It can be cooked inside of or on top of a vegetable or individual meat, fish, or poultry portion. When it is cooked it absorbs juices from the meat, adding to the flavor and moisture content of the final product. It will have a soft texture without a crust (or with very little except on the outside where direct heat reaches it).

Dressing ingredients can be identical to stuffing, but will taste different. It will not stay as moist or absorb juices from being baked inside something, and it will form a crunchy top (unless you keep it covered while baking). It isn’t unusual to make enough mixture to both stuff your turkey as well as baking a side casserole dish to make sure there is plenty. Pouring a little broth or drippings over the baked dish will give it most of the flavor of the stuffing version.

There is always a question about the temperature, isn’t there? Why is this part so confusing?

A lot depends on the ingredients.

If you are making a bread, nut, fruit and vegetable mixture with no meat products and baking as a dressing in a pan, the internal temperature should reach and be held at 135°F.

If your mixture contains fish, meat, or poultry of any kind, it should reach an internal temperature of 165°.

The confusion comes in when you stuff it into a bird or anything large such as a big pumpkin. The external temperature will reach 165° long before the inside will, and the outside will end up overcooking. Or the outside will be cooked perfectly, and the inside becomes a potential source for food-borne illness. Yup, that’s exactly what you want to give as a gift to everyone around your dinner table. NOT.

In the case of a turkey, you can cook the bird until it reaches 165°, and then remove the stuffing and let it continue cooking until it also reaches 165°. You probably want to let the bird roast for a few more minutes as well to make sure the inside of the cavity comes up to temperature.

Personally, I think that seems like a lot of work. I would rather stuff the turkey with a couple of onions, maybe some celery or a couple of orange halves. These help the bird hold its shape, as well as adding flavors to the all-important drippings. They don’t have the same kind of solid mass as a stuffing does however, and the heat is allowed to move more freely, ensuring even cooking.

Your other option is to stuff and roast smaller, individual portions, such as roulades, or stuffed turkey breasts, or smaller birds such as game hen or quail. The smaller size will allow everything to reach the desired temperature at the same time.

Stuffing can be used to top or fill other foods as well, such as mushroom caps, squash, artichokes, zucchini, tomatoes, etc. I recently decided to stuff a kabocha squash, and then used the leftover as a dressing underneath it. Even though it isn’t a piece of meat with internal juices, the batch that was stuffed inside the squash still had a soft, moist texture while the dressing underneath developed a wonderful crunch. The best of both worlds!

I used Deliah’s Chicken Sausage for this recipe, because it is delicious, and because it is from a local Atlanta businesswoman that has her product in local stands and stores! I recommend it if you can get it, but if you can’t, use your choice of a good chicken sausage, or regular pork sausage.

Cut the top from the squash, clean the seeds and fibers out.
Using your best knife skills, clean and prep the various fruits and vegetables.
Cut and toast croutons. (Yours don’t have to be gluten-free, but this is a great use for stale or ‘failed’ loaves).
Saute the chicken sausage and break into crumbles.

Mix the dry ingredients together. Add a splash or two of apple cider (hard or soft) for flavor and moisture. Don’t add too much or it will get soggy.
Fill the squash. Place the top back on the squash to keep the moisture in and prevent a crust from forming on the top. Or leave it off, if you want the crust.
Place the remainder in a separate baking dish, or as I did, fill a cast iron skillet (that the chicken sausage was cooked in) and nestle the squash in too.
Bake at 350° until the stuffing inside the squash has reached 165°, roughly 35 – 45 minutes.

2 thoughts on “Dressed and Stuffed”